In Awe: LP in Action

Rarely have I seen a person so comfortable on stage and in their skin. LP can be seen here on stage at the Paradise Rock Club in Boston demonstrating why she landed on Vogue’s 2013 people to watch list. It’s 2014 and we are still watching. Read more →

Fair Fares on the MBTA?

By Barbara Jacobson Starting on January 17, 2012, the MBTA began a series of Public Workshops to discuss the impending fare increases and service reductions for public transportation throughout the Boston metro area. On January 23, I attended a public meeting at Roxbury Community College and the general consensus from the crowd: anger and disappointment. In order to speak to both the… Read more → 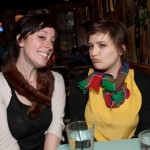 Tucked away on residential side of things in the South End is a delightful treasure called Delux. This bar reminds of of one of my old favorites in Oxford, Mississippi, The Longshot (R.I.P. 2007). Read more →