Mount Vernon: well guarded by the citizens of Somerville 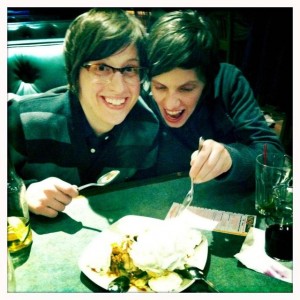 I’ve lived in Somerville, MA for about a decade and think of it as my home now.  Occasionally when I say I’m from Somerville though, some loud mouth in the crowd yells, “you’re not from Somerville” with a thick local accent.  When I showed up to the Mount Vernon Restaurant, I had an idea of what to expect.  Upon walking in, the staff clearly noticed that we were new customers, but were friendly.  I tried to strike up a conversation with our waitress, Ellen, and felt a bit awkward when I mentioned that “the Wolf” and I were from Somerville—she clearly had lived there all her life.  I quickly corrected myself and said that I had lived in Somerville for around 8 years and that I thought it was about time that I checkout Mount Vernon.  Ellen was kind enough to chuckle, but I could hear her saying the words in her head.

Putting my local status aside, I was thrilled to be sitting in a green leather booth with a view of some of Somerville’s life long residents at the bar.  I’ve grown tired of my usual hangouts in Davis Square and welcomed the adventure of trekking out to a restaurant on the East side.  It’s very close to the McGrath Highway underpass, and for a moment, I almost felt like I was in Brooklyn.  It’s a real rarity to hangout near an underpass in Boston, and as a lover of urban settings, I consider this a plus.

When I first moved to Boston, I was a bit shocked by the scarcity of seafood on most menus.  Sure, you can get fish and chips everywhere, but a real seafood selection can be challenging to find.  Mount Vernon boasts a large seafood menu and claims to be the “home of the twin lobster special.”  I was hoping to try this out, but it was a bit out of my reach in the off-season.  The food was great.  We were blown away when the meal started with popovers, yes popovers.  The drinks were well priced and the bread pudding was irresistible (picture French toast with pudding, whipped cream and ice cream all over it).

I think Ellen warmed up to us by the end of the meal, even though I made a few faux pas like changing tables because it was teetering.  We made sure to leave Ellen a fat tip like good yuppie visitors should do.  I think she’d be happy to see us again, but I don’t expect any high-fives or locals discounts for another 20 years, that’s if they can ever get past my nonnative status.

1 comment for “Mount Vernon: well guarded by the citizens of Somerville”