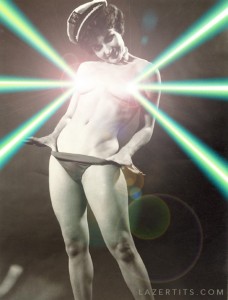 A few months ago a senior contributor at karousel stumbled upon this gem, www.lazertits.com. Most websites come and go, you check them out for a few minutes, but then you breeze right through to the next best thing. But LAZERTiTS.COM is different; since the day I came across this site my life has actually been altered. I even ended up writing a song called “Space Party” that refers to girls having giant lazer tits.

LAZERTiTS.COM is full of amazing vintage nude photos that now appear with, well, lazers shooting out of their tits. What is truly amazing is the focus of the founders. This is all they do, really. They just Photoshop lazers on tits and have a true obsession for it. They use words like “mammarobilia” and signoff their messages with “Hi fives and lazerbeams.” To top it off, the co-founders refer to themselves as Dr. Jugz and Lady Lazer Boss. Really, who are these people?

Who are the founding members? Tits or no tits?

Dr. Jugz: [clearly male and, therefore, not equipped with mammary weaponry] While Lady Lazer Boss [who is beaming rays of her glorious LAZERTiT light onto karousel’s interview questions] might be current pioneer of the TiT Revolution, at LAZERTiTS.COM, we are simply revealing to you the streaming undercurrent of TiT power that has been there all along.

Lady Lazer Boss: This often discrete power has been around since the beginning of human kind.

How long have you been LAZERTiTing?

Lady Lazer Boss: So long as there have been TiTS, there has been the beaming glory of their mesmerizing mammary mayhem. Our Revolution is merely the modern day revelation and honoring of what we know to be the ancient and, until recently, secret ability of women to fire lazers from mammaries.

Dr. Jugz: The TiT Revolution went public on the website www.lazertits.com on March 8th, on the Mayan day of Cipactli, which today is of course International Women’s Day, and soon to be known as Global LAZERTiTS Day.

Can I see the first LAZERTiTS pic?

Dr. Jugz: Actually, first ever depiction of LAZERTiTS was found burned, or most likely lazered, on the wall of a cave in the South of France. She is shown alongside a herd of bison, which is unusual, as other such paintings of this period show humans at odds with the animals. The woman with LAZERTiTS is rendered in a way that she looks as though she is guiding and protecting these beasts.

I must ask, what inspired you to launch LAZERTiTS.COM?

Lady Lazer Boss: LAZERTiTS.COM was launched out of the understanding that the world was ready, if not hungry, to see the power of the female mammary lighting the way for humankind. The collective energy of Universal TiT power has reached a critical mass and is here to blast wide-open the minds of anyone in the way.

Have you ever lazered your own tits for fun? Your mothers?

Dr. Jugz: As you can clearly see, Lady Lazer Boss is lit up. Her mother has some damn bright LAZERTiTS too. I’m guessing, like a fiery spirit, these things tend to run in the maternal line of the family.

Are you a feminist?

Lady Lazer Boss: (raises her eyebrows, looks down at her lit up LAZERTiTS and turns up the intensity of her nipple trajectory) Do you have any other questions?

Do you know of any other art like yours?

Dr. Jugz: The fine art of nipple wizardry has been mastered by women all over the world. This innate power needs nothing more than to be excited within, brought to light, and developed. We hope that by publicizing the Revolution, we will encourage women everywhere to reveal the guiding lights of their own LAZERTiTS.

Lady Lazer Boss: For any woman who might not yet been fully in touch with the art of their own LAZERTiTery, we extend our support. We are even offering special training for women interested in joining our ranks. It is our hope that the World Wide Web can be utilized as a platform of support and community for women of the Revolution to reach out to fellow TiT sisters and supporting brothers. LAZERTiTS.COM IS the call of Revolution!

I’m not sure what it is about these guys. Maybe I just love LAZERTiT pics or maybe I’m just happy to have found people that appear to be crazier than myself.

A special thank you to the LAZERTiTS staff for the interview and the exclusive LAZERTiT pic. We will treasure it.

← Notes from the office relocation, 76
Guess Who’s Coming to Dinner: My Night with The Room’s Tommy Wiseau →

2 comments for “LAZERTiTery at its finest”