A Phoenix from Asbestos–The Paddock

There are times when a community feels a loss so deeply and so cohesively that it caulks the gauges of race, sex, age, and social class to bring together people in a shared time of mourning.  Such was the case with the sudden and debilitating loss of Somerville’s beloved Razzys this past May.  Like a Greek chorus we wailed, brothers and sisters as one voice, begging for Razzy’s to say it ain’t so.  But it was—Razzy’s was taken from us far too soon. We still weep for our lost home away from home.

However, like a phoenix from asbestos, a new prince arose, allowing us to believe once again in a respite for our dry throats and shallow wallets. Out of tragedy comes hope, and the passing of Razzy’s has led us to a coronation of a new monarch. We crown—The Paddock.

The Paddock might not look like much from the outside, but once you crack that heavy steel door and step foot into the dimly lit sanguine humored room there is no doubt that there’s something special about the place.  Maybe the first thing you notice is that it is HUGE. Or maybe it’s the giant porcelain horse heads resting above the booths.  Either way, you notice something big. Generally, in the Boston area, theme bars take a conservative approach to their décor.  There might be a tiki torch, or a photograph of Jay Leno, but generally if you’re looking for some serious kitsch you have to head out to Route 1 to drown yourself in rum drinks and slightly offensive Asian flare. The Paddock, however, has taken the reins of the fledgling scene and entered into a medium-to-fast paced trot.  Everything in the bar is horse themed, from the stable paddock doors leading into the bathrooms, to the slightly anthropomorphic horse paintings above the doors.  There are two rooms, one a restaurant/bar and the other a dance/band/karaoke haven, both of which stick emphatically to the theme. 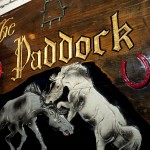 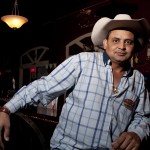 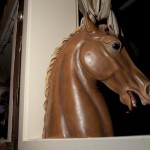 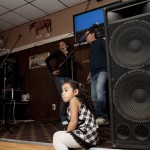 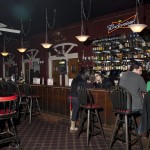 Upon stepping up to the bar, Jen and I were passed by a slight raven-haired waitress carrying a plate of some kind of food that we couldn’t identify.  While ordering our (reasonably priced) drinks and perusing the menu we happened to inquire about the mystery meat that floated by us like a pungent dream.  This question yielded not only an answer (sausage), but a full menu that had been hidden in the narrow recesses of the lacquered barn door tabletop.  I don’t remember what was on this backdoor menu, probably due to astonishment…or white wine, but I do remember that it looked amazing in its laminated sheath, illuminated by the Budweiser Clydesdale lights that hung above it.

Even though it was a Sunday night, mere days after Thanksgiving, when people should be detoxing instead of getting re-drunk, the Paddock was filled with locals looking to get their last Brazilian karaoke song in before heading off to bed.  Their stage can be used to raise you and your honey-sweet voice to the rafters, or for your friend’s band, which the owner assures us is A-OK with him.  Maybe the best discovery was that you can rent this GIANT space for a mere $50 (to cover any mess you might make). I should probably keep this knowledge to myself, but profound affection leads to extreme generosity.

The Paddock is no Razzy’s, but it shouldn’t have to be.  It is its own entity, and should be treated as such, and adored for what it is, our new home away from home.

by Andrea O’Meara and Jen Grygiel